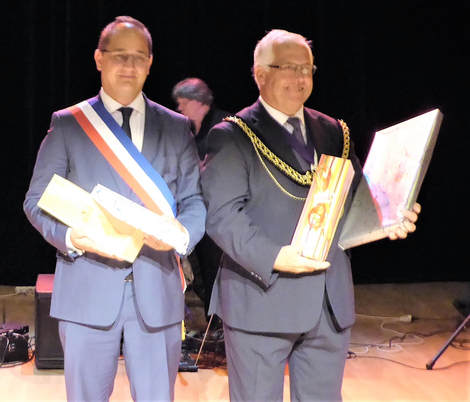 
TWINNING WITH LOUVIERS WILL CONTINUE

​WHEN UK LEAVES THE EUROPEAN UNION,

​
“Soon the United Kingdom will leave the European Union,” Weymouth & Portland Mayor Councillor Kevin Brookes told the official twinning reception in Louviers. “Whatever future trading and political arrangements are in place when we leave, it is my sincere wish that the relationship and friendship between Weymouth and Louviers remains as strong as ever.”

“Town twinning allows us to take strength from embracing new ideas and different culures,” continued the Mayor. “One of the key aspects of town twinning is the strength of new and enduring friendships that are enhanced by a shared pleasure in learning from each other, rather than being divided by distance or language. Louviers and Weymouth & Portland, like many other towns, have their roots in settlements founded in ancient times.” The Mayor went on to observe that the twinning had been inaugurated 59 years ago in 1958 and that the Diamond Jubilee of successful twinning will be celebrated next year in both Louviers and Weymouth.

Addressing Louviers Mayor Francois-Xavier Priollaud at the Hotel de Ville, Councillor Brookes concluded: “Given the reason we are all here today, one key aspect is the unity we share through town twinning. The opportunity this has given us to share culture, history and heritage is invaluable. We can learn from each other. From our ancient pasts, whether Roman or Celtic, we have each been shaped by our geography, our traditions, our economies, our national and local governments. This has made us each unique, but whilst our uniqueness can be a strength, it should not blind us to receiving ideas and influence from others.”

Weymouth twinning committee Chairman Geoff McDonnell began by saying “it is a great feeling to be back once again, amongst our friends in Louviers. However weekends like this do not just happen and we realise that a great deal of planning, organising and effort goes into making twinning weekends successful. So we would like to express our appreciation of all the hard work put in by the new Louviers twinning committee Chairman Nathalie Fizet and her team. We say a very heartfelt thank you.”

“We can all think of other dear friends who are having health problems and who sadly can't be with us,” continued the Chairman. “If I may give a special mention to former Louviers twinning committee Chairman Jacqueline Hamon, who is at present confined to a wheelchair, while waiting for a solution to her health problems. Jacqueline is so enthusiastic about twinning, it was a great pleasure for me to work with her. We stay in touch and I visited her today- she sends her best wishes to you for a happy weekend. We also spoke to another former Chairman- George Veyrat- who sends his regards. We are still determined to see that the bonds of friendship between our two towns remain undimmed. A quick glimpse round the room, seeing English and French friends chatting and having fun together, is sufficient proof of that.”

The Weymouth party travelled together in a coach, stopping at Granville and visiting Villedieu les Poelles and Pont Audemer. The Sunday excursion from Louviers was to the zoo biosphere at Val de Reuil.